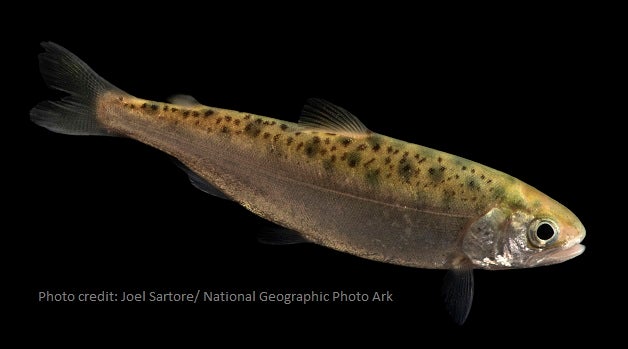 Chinook salmon is a native anadromous species and the largest of Pacific salmon. In California adults migrate throughout the year as four seasonal runs. Commonly referred to as a cold-water species they are currently facing population declines due to multiple factors such such as anthropogenic habitat alterations (e.g. dams) and a changing climate (e.g. warming water temperature). Our lab aims to understand their physiology to better inform management actions taken in California and across the west-coast.

Due to their life-history strategy, Chinook salmon exist as a collection of populations, particular to their river systems. How these populations differ from each other can inform how we understand salmonid adaptation as well as provide insight into how to best manage this plastic species. Recent Ph.D. graduate, Ken Zillig, has been looking specifically at temperature, and how different populations of Chinook salmon may exhibit varying thermal physiologies and whether these variations are a result of local adaptation.

His current work has explored populations from California, Oregon and Washington and found signals of local adaptation both among populations native to California and several fall-run populations from the Columbia River to the Sacramento. He hopes that these results open the door to more place-based management of Chinook salmon to better support remaining physiological diversity.

Spring-run hatchery Chinook salmon smolts released in the San Joaquin river have been experiencing high mortality rates and low returns. Smolts have been held in cages in locations shown to be areas of high mortality by previous telemetry studies for acclimatization and then physiological testing of mRNA expression of sublethal stress and possible pathogen infections. By combining assessments of pathogen load and stress markers linked to water quality, we should be able to glean greater insight into potential mechanisms underlying observed mortality patterns. It is hypothesized that higher mortality rates (outside the initial release) are due to accumulated sub-lethal stress stemming from degrading environmental conditions in the San Joaquin River. 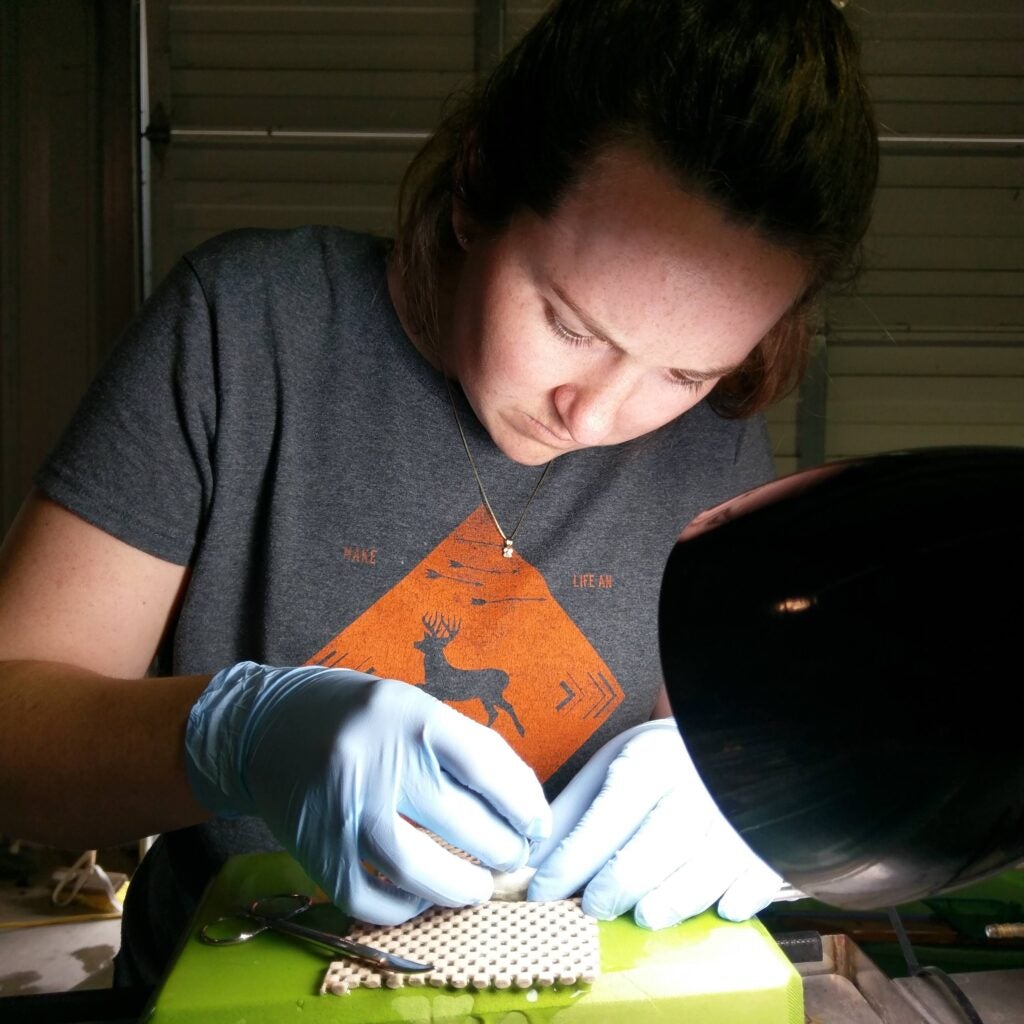 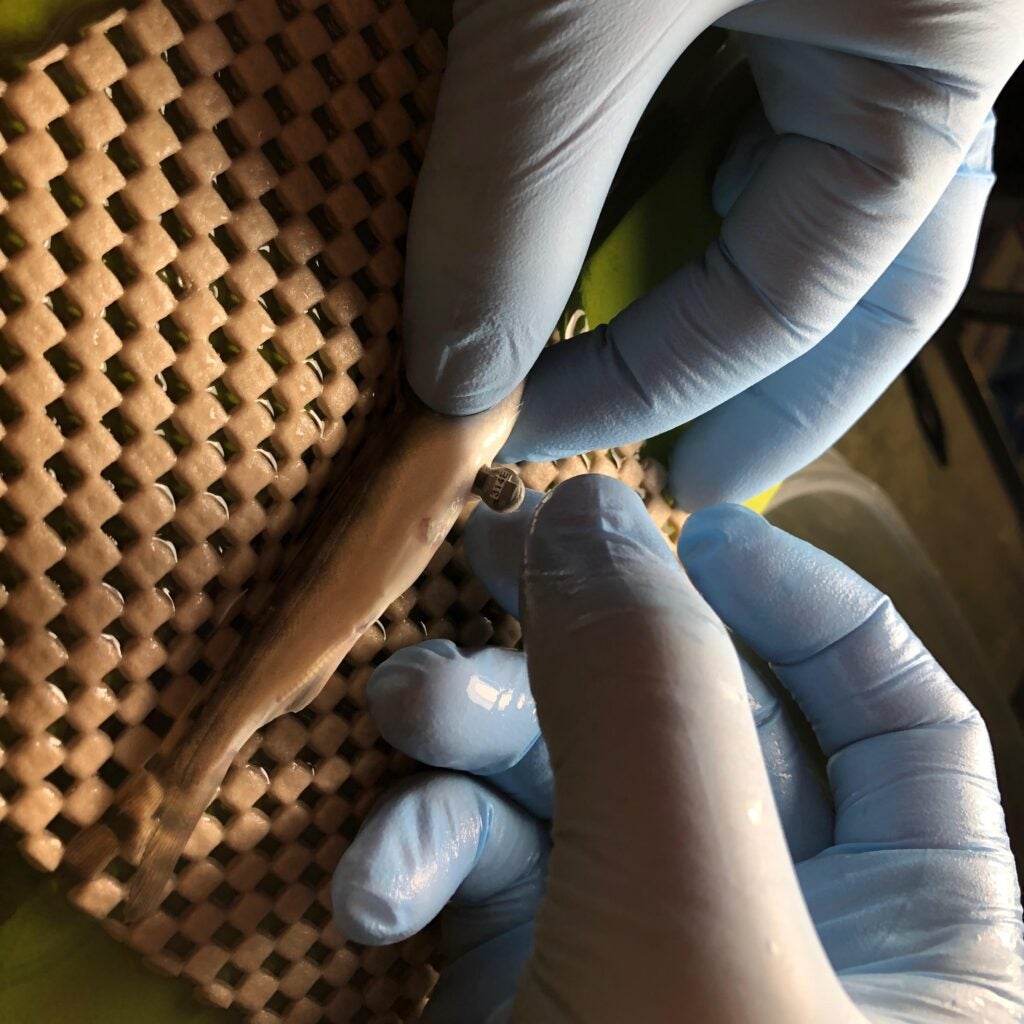 In April 2019, our team tagged 700 Fall-run Chinook salmon parr at the Coleman National Fish Hatchery. Amanda’s study looks to compare survival rates between two release sites: at the hatchery and 70 miles down river at Scotty’s Landing. Past telemetry information has shown the highest mortalities to be within the first 100 miles of travel from the hatchery release site. Releasing further down river may potentially decrease mortality by predators during outmigration.

The Bureau of Reclamation, partnered with the California Department of Fish and Wildlife, has been monitoring rotary screws traps along the upper portion of the San Joaquin River below Friant Dam in order to estimate juvenile production. In 2021, parties were interested in understanding the survival and movement rates of natural origin Spring-run Chinook smolts within the upper river’s restoration area. UC Davis was fortunate to be asked to conduct tagging of natural origin Spring-run, this being the first time conducting tagging or natural origin smolts on the San Joaquin River. Lead by Master’s candidate, Amanda (Agosta) Peterson, receivers were deployed throughout the upper reaches of the river to detect the tagged smolts.

Since 2017, UC Davis has been analyzing the survival of hatchery raised Spring-run Chinook salmon during their outmigration through the Sacramento-San Joaquin River Delta. The San Joaquin River Restoration program was developed after litigation over flow releases from Friant Dam and had the goal to restore a large portion of the San Joaquin River to improve many species population sizes within the system. The UC Davis telemetry study began after a need to understand the very low return rates of San Joaquin River ESU of Spring-run Chinook salmon, largely stemming from extremely low outmigration success of juveniles. This ongoing study is examining the locations of and potential reasons for the high mortality.